Following on from the first half of the day at Croydon's inaugural Cro Cro Land Festival - see coverage here - as the sole reviewer for Little Indie on the day, it is back into the fray after a brief break for more mosh pits, mayhem and music.

Festival founder Angela Martin brings her own band Bugeye to the main stage, and this band know how to work a crowd with loud unabashed disco-glam-punk songs. The room is packed, with people ready to party and let their hair down. ‘Disco Dancer’ - their first single release last December as an expanded four-piece - conveys its synth melody and flaying guitars with joy, and it is easy to see how they have been likened to "Blondie covering Elastic", while new song ‘Electric’ gets the crowd listening and getting down at the same time. ‘Hey You’ with Angela’s vocals piercing over the guitars, brings an end to a set that leaves the crowd spent and the girls covered in glitter. 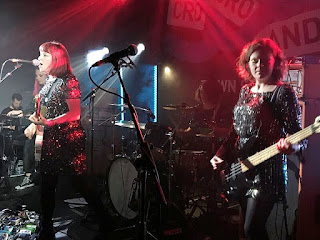 In the main room again, Liverpool’s She Drew the Gun takes to the stage, with vocalist Louisa Roach pulling no punches in her delivery with the rapid drums of ‘Resister’ which instantly connect with this crowd. The lengthy spoken word ‘Poem’ (for which the idea came after reading Vonnegut's Slaughterhouse Five) brings some rough justice to this joyful room with a song about the daily grind of life: "Life give me something to believe in / No lies, just something to believe in / Am I the only one that's grieving? / These things that belong to you and me that they are thieving." After that they bring things up again with ‘Pit Pony’s infectious beats and synth and brings an ends to this eclectic set. 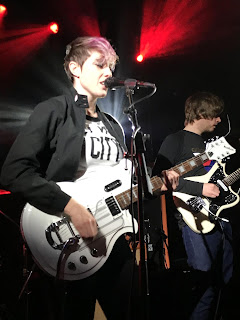 Back in the Concrete Playground turn the "wicked. wild dub" of Smiley & The Underclass who put smiles on faces with a bouncing set. This London band, who are a unique mix of ska, punk and reggae dubstep - with a whole lot of love thrown in for good measure - have been around for a few years now, but perhaps not been given the recognition they deserve. ‘It’s All England’ from their self-titled 2013 EP has all the rudeboys and girls grooving to its blissful beats, whilst set closer ‘Jump The Barrier’ has the floor shouting the chorus back in gleeful abandonment. 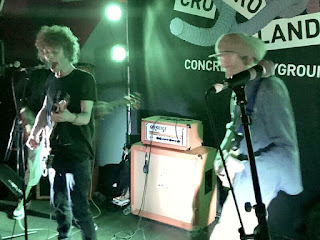 In the main hall, Bang Bang Romeo have come to entertain us with thrir soulful rock-blues blend. A band on the rise, ‘Chemical’ brings out Anastasia Walker’s powerful vocals dominate over crashing guitars that capture and mesmerises the crowd. ‘Shame On You’, the title track of last year's EP, has the beats and infectious chorus to set the floor alight. Set closer ‘Invitation’, makes you realise that these guys are gonna make it to the next level. 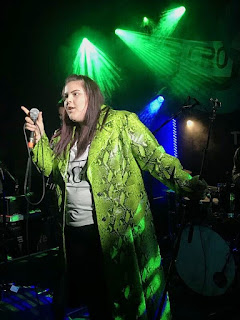 As I make my way through the bodies at the Concrete Playground, I find myself in front of Leeds' favourite garage punks Weekend Recovery who are in the mood for a party. Their wild set includes new single ‘Bite Your Tongue’, an aural blast of quickfire drumbeats, as fans go crazy as vocalist/ guitarist Lori Janey runs into the crowd. ‘Why Don’t You Love Me’ with its fuzzy guitars and Lori looking like Pru from Blade Runner screaming out the lyrics at a pitch that must have required plenty of tonsil-soothing salve later. 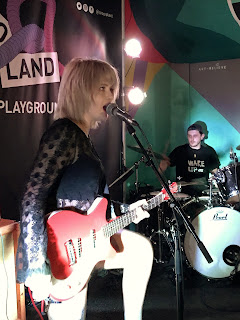 Back to the larger Town Square, and there's a packed room waiting for Nova Twins to perform. These South-East London grime-pop girls - singer/ guitarist Amy Love and Georgia South on bass - are known for putting on a good show, and as they come on stage with a glint in their eye, you just know that this set is going to be another of them. ‘Bassline Bitch’ starts off the set with its urban rap filtering through our bones, it certainly gets the crowd worked up as they start to move. ‘Drums’ (skins man Tom Nugent supplying that side here), was a rrcent highlight at Eurosonic, and you see why. While Georgia’s bass pumps away, and the literal drums play demanding role, it is the presence and passionate vocals of Amy, using the whole stage as her personal playground, that one can't help but focus on with her in-yer-face delivery. 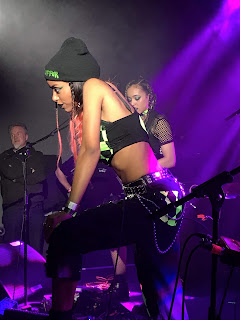 The Lovely Eggs are up next and this Lancastrian lo-fi, psych-punk duo have brought a big crowd in with them. This band need no introduction and a real coup for the festival. Opener ‘I’m With You’ sets the tone, with the machine-gun drums of David Blackwell and vocals of Holly Ross echoing around the room. The gloriously titled ‘Wiggy Giggy’ has the title sung on a looped backing track as Holly provides colourful guitar riffs alongside her partner's krautrock beats. ‘Return of Witchcraft’, a power chord-driven song with crazy drumming, adds to the anarchy of the set which ends their show in dramatic style. 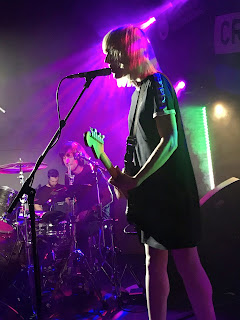 Sisteray are one of my favourite punk bands, and in the Concrete Playground it seems others feel similarly as the room is packed out. They start off with
‘Who R Ya’, getting Michael Hanrahan's bassnotes thumping around Niall Rowan's edgy vocals that bring the song alive. ‘Rumour Mill’ from last year's 'Sisteray Said' EP is a personal favourite, and new drummer Harrison has no problem keeping up with bandmate Dan Connolly’s soaring guitar riffs. The just released ‘April Fools’, first premiered by John Kennedy on Radio X, makes its live debut here, and boy does its pumped up Brexit theme resonate with the crowd. 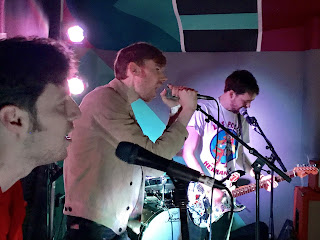 Back to the final show at Town Square where hordes of people are clammering to get in to see Brighton’s Blood Red Shoes. Starting the set with ‘Elijah’ with its slow intro to solid rock meltdown which in turn gets the crowd swaying along to Laura-Mary Carter’s softly melodic vocals. Fan favourite ‘Mexican Dress’ with its pulsing guitars and rhythm beats, gets a warm reception, who by now are starting to dance their socks off. "Running hot into the night / My legs have failed" may run the opening to last song ‘Je Me Perds’, but this humdinger of a tune certainly kept the crowds bouncing on theirs, as the off the scale drums of Steven Ansell in particular had the room begging for more. 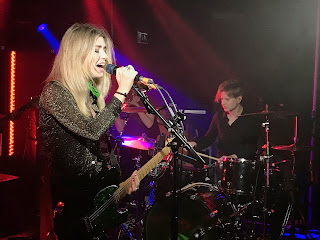 Londoners MOSES are a tour de force live; young guns that are ready to take on the world with a big heart. Playing the last set of the festival  the room soon fills as vocalist Victor kicks things off with ‘Low’, but it’s only when they get to ‘You Need Love’ and the mighty chorus-driven ‘River Thames, that the gig becomes truly electric as the crowd dance, chant back “River Thames!” to the band like it's a national bloody anthem, and generally mosh like fans possessed; which continues as the ebullient frontman runs into the crowd during ‘Cause You Got Me’, whipping the energy in the room up a notch higher amongst the pogoing  throng, moving as one to its contagious beat. 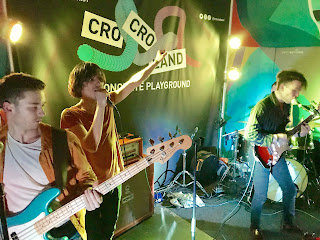 And as the final note fades, you can see by the expressions on faces that this new one-day festival has been something special. Bring on Cro Cro '20.