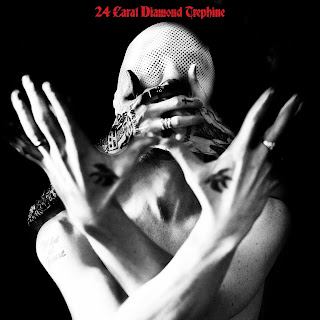 Three years on from their bleary eyed self-titled EP, Avalanche Party have been organically building up to their debut album with sheer graft through a near constant stream of feral and ferocious live shows up and down the UK. Such is their tireless approach to touring, its a miracle the band managed to find a spare thirty-nine minutes in their busy schedule to record their debut album ‘24 Carat Diamond Trephine.’ But what a blessing that they did.

‘El Dorado’ is an unexpectedly gentle, yet atmospheric start to the record with its Nick Cave & Warren Ellis sounding western. It’s a perfect, gripping opener to the mad circus that follows. Actually, about it being gentle, singer Jordan Bell spits out a line about blowing a baby rabbits brains out, but aside from that it’s perfectly tame.

Those familiar with Avalanche Party’s trademark live shows will recognise the unforgiving pace of ‘7’ with Joe Bell dishing out a heavy punishment on his bass and Kane Waterfield’s quick-fire stabbing of the snare. This is the sound of band possessed and at their uncaged best. Latest single ‘Howl’ takes things down a slightly better lit alley with its sunshine piano line from Glen Adkins and backing vocals from guitarist Jared Thorpe. There’s even an unexpected saxophone thrown in there. It’s a total contrast to the majority of album, but it’s undoubtedly one of the standout and memorable moments across the piece.

‘Milk & Sunshine Is A Heavy Dream’ is an instant classic. It’s a destructive car ride of a song which leaps out at you with its manic guitar line. It showcases the trademark Avalanche Party style with a few teaspoons of Queens of the Stone Age thrown in there for good measure.

A welcome ear breather in the form of ‘Hey Misdemeanour’ is a low-fi slow burner which does its job in separating up the chaos. It’s a little bit filler, but it’s far from a disaster. As for ‘Playing Field Blues’, it’s an intriguing and uncomfortable listen that goes through the motions but has something unique about it that’s hard to pinpoint. Tying up the loose ends with one of the most complete Avalanche Party songs to date, ‘Rebel Forever’ almost acts a mash-up of the ten songs that preceded it to slam the door shut on their debut.

There’s so much to explore on this album and it’s likely to take a few listens before it starts to really blossom into its true form. But there’s no escaping this is an extremely impressive and ambitious debut that aside from a few nods to influences is unlike anything else out there. The band have managed to showcase their genre-bending best and sewn it all together to create a Frankenstein’s monster of an album that’s indicative of their terrifying potential.