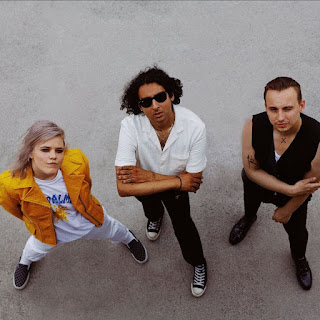 BLOXX have announced the release of debut album, 'Lie Out Loud', is scheduled to drop on August 14 via Chess Club Records.

The album will feature singles 'Go Out With You' and 'Coming Up Short', alongside a wealth of new material from the West London three-piece.

To coincide with the announcement, today also sees the release of the album's title track, which premiered last night (April 28) as the 'hottest record' on Annie Mac's BBC Radio 1 show.

"'Lie Out Loud' feels like a big moment for us, it's a bit angsty and was actually the last song we wrote for our record, whilst we recorded the record, so it nearly didn't even happen! frontwoman Fee Booth reveals.

"I remember being so wildly annoyed that day because I was sitting around doing nothing and I just remember myself and Jenn Decilveo (our producer) shouting lyrics at each other and arguing over whether or not 'lie out loud' made any sense. It definitely does."

Check it out via the animated visuals of director Barnaby Catterall below.