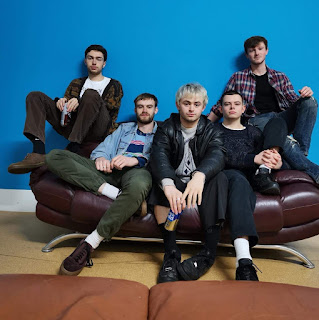 Incendiary Galway-based five-piece Turnstiles - all in their early twenties - recently released their latest raucous punk  single, the frenetic 'I.D.C' - out now on Blowtorch Records. 'I Don’t Care' may be what the letters stand for, but this is by no means a band without passion - or a way of grabbing your attention. Fronted by the London-born Callum Mitchell, his urgent shouts hold sway over thrashing guitars and driving drums and bass.

Funny enough, I started getting into music properly as a result of a broken foot from playing football aged 15. I had a lot of spare time and my older brother's guitar was lying around; silver linings and all that. Myself and Luke both got to know Callum through the local rave scene in Galway, and I met the rest of the lads when I joined the band. Jake and Colm live in the same estate and were previously in other bands before Turnstiles. Same as myself, I was in a band called The Kegs in my hometown, Tuam. Jake played in a band called The Vibe, and Colm played guitar with Two Trees. We are now based in Galway city.

I suppose I would say our style is quite upfront and immediate: I guess if we had to put ourselves into a genre it would fall under post-punk/alt-rock. There is a broad range of influences on each of us individually. Myself and Callum first got to chatting through a mutual appreciation of The Stone Roses. Callum is influenced by Fontaines D.C., Oasis, Idles and early English grime artists like Roots Manuva and Dizzie Rascal. Colm's guitar style is heavily influenced by John Frusciante of Red Hot Chilli Peppers and Jimi Hendrix. Jake is into stuff like Joy Division, Bob Dylan, Belle & Sebastian. Luke likes Girl Band, is a big fan of The Drums (the band as well as the instrument), King Krule and music that hits hard, like his drumming. For me, I would be into the same artists as the lads above. I also am a fan of Kasabian, The Prodigy, Akala, Nas. Hearing Arctic Monkeys as a kid had a major impact on me and was probably the catalyst for me wanting to learn guitar and be in a band.

The writing style generally starts with a bassline that Jake came up with at home or the odd time I might bring a riff I wrote at home; Colm also brings forward ideas and has the ability to riff and jam over whatever we are trying to come up. Colm never needs instruction and we generally just leave him to figure out his leads and fills as we write. We generally just jam out riffs and go from there. Luke adds huge energy to the songs, he also has input in terms of when the song should build up/break down etc. Jake has volumes of lyrics saved on his phone and when we have an idea, he usually pulls out some lyrics that fit the tone of the music. Then Callum adds his vocals and his unique delivery which defines our sound.

In terms of production, we recorded out first three singles with Mike O’Dowd from Lakeland studios and Mike just always seems to know what sound we are trying to achieve, he has always had a great grasp of what to suggest and he is a pleasure to work with. After recording  Mike sends the mix over us and we offer feedback for ideas of slight tweaks here and there. From there our manager, Richard Burke, looks after the mastering process which we are very grateful for as we haven’t got a clue how to do all that stuff.

Our new single, called 'I.D.C', is a sub-two-minute, high energy punk track. 'I.D.C' is an acronym for 'I Don’t Care' which Callum sings in the chorus. It’s a song that will resonate with a lot of people and it always seems to energize the audience at our live shows. Jake penned the lyrics, but from my point of view, it captures the catch-22 situation of feeling responsible to try and make a difference in the world but getting frustrated by stagnation of progress. I think young Irish people are moving away from 'Civil War' politics, and this song reflects that. It was recorded in Windmill Lane Recording studio in Dublin. Shout out to Cian Synnott who mixed and mastered the song for us. We had a great day in the studio with Cian and his team.

With live shows postponed until further notice we have all had more time to try to find inspiration, hopefully. When social distancing restrictions are eased we are looking to be able to meet up and play together again. We will have another track from our session at Windmill Lane being released within the next few weeks.

At the moment, we have four tracks available to stream on Spotify. We also have music videos for our songs 'Wasting Away' and 'Moving Forward' on YouTube.