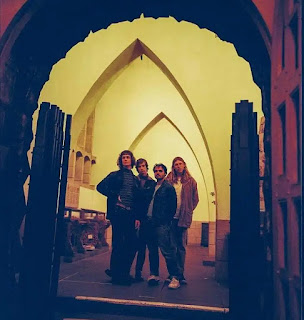 This version for the Welsh foursome's North American fans comes via their debut record, 'The Non-Stop EP', out now via Missing Piece Records / Communion.

The video sees the denim-clad band clapping along on the fuzzed-up track, while an active dial-in number (848-467-8079) gives their US followers an opportunity to leave a message.

“'Double Denim Hop’ is the first song that I wrote that made true sense to me," says frontman Tom Rees. "I had travelled up to Scotland to see a friend in an attempt to recover from an existential crisis post-university. I’d been writing a lot of awful songs and decided to take a break - after donning some double denim and going to a very cold barbecue on the beach the idea for the song was formed, I even made an instagram post with the main lyric. I think that's what actually gave me the idea for the song… how sickeningly post-modern is that?”