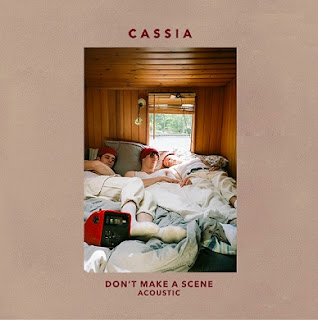 Cassia follow the recent release of ‘Don’t Make A Scene’ by sharing a new spin on the track with an acoustic version of the song.

While the original was an uplifting three minutes, this stripped down take heightens its laid-back, blissed out charm with jangly acoustic guitars and a subtle string accompaniment. It also puts a fresh focus on frontman Rob Ellis’s lyrics, which offer a timely reminder to follow your passions regardless of what other people might think.

Watch the trio performing the song in their Casa de Cassia studio, which was named by a fan during one of their lockdown live sessions.

“Going back to the UK after being in Berlin during lockdown gave me a whole new perspective on the song’s meaning,” says Ellis. “It reminded me that it's such a British trait to not make a scene. There’s nothing better than a bit of British awkwardness. Really felt good to come home.”