Track Of The Day :: Sprints - Drones 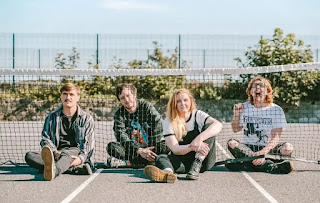 "'Drones' is very literally about my struggles with imposter syndrome," reveals Chubb. "I think being a female in music, I struggle a lot with feeling like I have something to prove. It’s not okay for me to just be good, I have to be great. I have to prove constantly why I am deserving to be on the stage, or holding that guitar or that microphone. That pressure can be very difficult to deal with, and I think a lot of the times you doubt yourself then, am I actually able to write? Or is this all shit?

"'Drones' is about my experiences with dealing with this pressure, but realising that a lot of people have these struggles. The bars fill, the car parks fill, life seems to go on and on, and we can become so focused internally on our issues that you don’t realise that maybe while I was wishing I was someone else, they’re also wishing the same thing.”