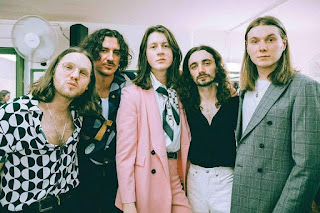 Blossoms have started their Christmas festivities already with the early release of two new Christmas tunes.

'Christmas Eve (Soul Purpose)' - which features the Stockport Junior Voices Choir - and 'It’s Going To Be A Cold Winter' are out now digitally, with a 7" vinyl release coming on December 11.

The band will also be premiering their documentary, Back To Stockport, on YouTube this Saturday (November 7), and will be available on Amazon Prime the day after. The film follows the five-piece as they prepared for their Edgeley Park homecoming gig, which took place last summer.

"We’ve worked with Charlie [Watts, director] on and off since the band started really, so when the opportunity to make something together surrounding the homecoming show in Stockport came about, we jumped at the chance," they explain.

"We think he’s really captured the spirit of the band, and being a friend, he was able to get the natural moments you don’t normally see in a band documentary. We love the film and hope you do too!"

Before that, singalong with the cool Yule newies here.