Track Of The Day :: Talkboy - Wrapped In Blue 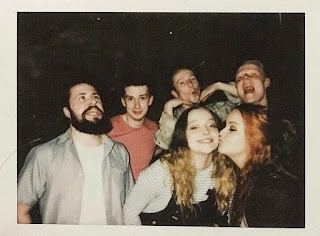 Leeds indies Talkboy return with their first single of 2021, ‘Wrapped In Blue’.

Released last week via Come Play With Me / LAB Records, the self-produced title track from the band’s upcoming EP (out February 11), follows the nostalgia-tinged lead single ‘Stupid Luck’ and the rousing ‘Sky Is Falling’,

"I feel like it’s the most arrogant thing ever to use the song title in the description, but when I wrote this it really did feel like everything was wrapped in blue," explains guitarist Tim Malkin of the driving, upbeat track composed of well-crafted melodieswhich adds another canon to their ever-increasing arsenal of impressive work.

"It’s about coming to the realisation there is so much more to get excited about than this blue exterior you’ve been looking at for ages; you just have to be selfless enough to take some time to look closer at stuff other than yourself. The moral of the story is keep the people you care about as close as you can, they’re your ticket out of whatever it is."