Track Of The Day :: The Lanes - There's A Locked Up Safe 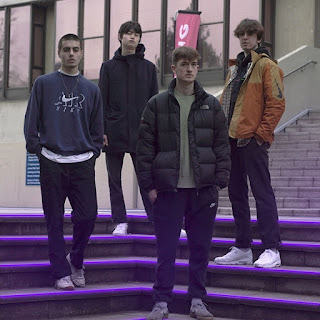 Who are The Lanes and why have they not touched my ears before? Why does their singer sound so bloody good? How is this new single, 'There's A Locked Up Safe', not up there (*points upwards on the being talked about popularity ladder*)?

I don't have the answers to all those questions, but I have listened to 'TALUS' on repeat... and don't want to stop!

Released last week via SONO Music Group (it's the new label's first offering in fact), it comes from the young Norwich-based indie alt-pop four-piece as the 2021 follow-up to last spring's debut single ‘Take The Hint’, and two live demo collections, ‘The Lanes, Vol.1’ and ‘Vol. 2’, put out in 2020's last half.

"‘There’s A Locked Up Safe’ is a shout of support to those stuck in dark places, struggling with the strain of growing up in the modern age on mental health," say the band. "It goes on to emphasise that there is a light at the end of the tunnel, suggesting how it can feel like this happiness resides within a ‘Locked up Safe’ but despite it all, it will get better."

Alfie Bowles is the frontman and rhythm guitarist - and the man with the voice of someone you just love from the start. He and Max Allen (lead guitar), Myron Endean (bass) and Harry Jones (drums) are all just a jaw-dropping 18 years old too, which makes them even more of a top notch outfit.

The opening is just sublime, with those delectable vocals that reach right out, and sound way more mature than the young years of their owner. As 'TALUS' progresses, the melodies, and in particular the impressive drums and jangly guitars, combine for a really, really good track.

"We're really keen on getting back into the studio as we have a growing number of tracks we would like recorded," Myron told Little Indie earlier today. "However, this depends entirely on when Covid allows us to get back rehearsing together etc. We had several gigs planned for last year so hope to get back gigging as soon as possible as like everyone were really missing live music!"

If The Lanes look as good live as they sound, then their first live shows of 2021 should be a treat worth waiting for.

The Lanes · There's A Locked Up Safe