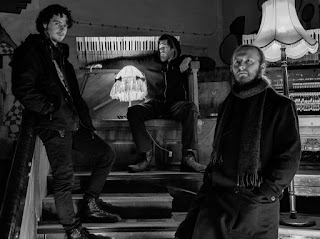 Leith’s psychedelic three-piece Felix and the Sunsets comprise of Max Wilson, Sean Logan and Felix Christie. Though the band are still relatively fresh faces on the Edinburgh scene since their inception in 2018, frontman Christie was formerly lead guitarist in Ayakara. Alongside the similarly defunct Indigo Velvet, the band were prominent figures in the city’s live circuit for a number of years so it’s good to see he hasn’t hung up his guitar and is now taking a more central role in his latest project.

Following in the footsteps of last month’s high-tempo ‘The Mushroom Song’ from their upcoming Creative Scotland funded EP, the band tone it down a little with the more lounge-happy ‘Leaving On the Next Train.’ The trio cite the old guard of Frank Zappa and Santana as influences, however there’s also shades of ‘Howl’ by Avalanche Party in the Western saloon sounding piano. The keys jump around and play an intense high-tempo game of audio ping pong with Christie’s vocals as both battle it out for centre stage for the lion’s share of the track.

The signature smooth sounding guitar which was ever-present in Ayakara makes an appearance two-thirds of the way in as a super sub for the piano and nods more towards the aforementioned influences with its clean and precise texture.

With the band planning to unveil the final track from their EP at the end of April ahead of its full release, given the diverse nature between the last two singles, it’s anyone’s guess how this is going to turn out. However, being unable to firmly pinpoint a genre only adds to the appeal of the band.

Felix And The Sunsets · Leaving On The Next Train