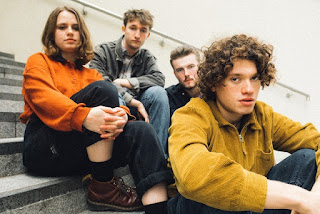 Liverpool's STONE follow up on last autumn's 'Stay Silent', with new single ‘Fuse’, a loud and propulsive anthem that captures the clash between internal frustrations and the banality of current life.

Frontman Fin Power’s stream-of-consciousness style lyrics, and their “staple Scouse delivery" is augmented by the sense of urgency and burgeoning riffs throughout.

“Lyrically, ‘Fuse’ was written about being frustrated with our everyday reality," explain the band. "The verses of the songs provide a contrast between the vernacular, everyday activities that would otherwise come off as benign i.e. buying a scratch-off and a pint of milk and Fin’s turbulent inner monologue, both of which exasperated by the transition from adolescence to manhood, the isolation of living alone and especially during the COVID era.

"The internal struggle between apathy (‘I don’t care’) and aspiration (‘long live the rebellion of punk rock’). The angst that builds from this isolated time all set to a fast paced, upbeat song that we hope ultimately lends a sense of optimism.”