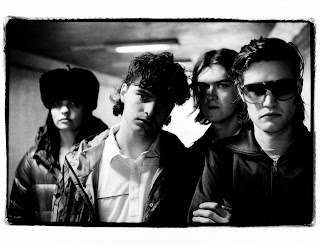 'X' marks the spot - and the title of the first new music from Working Men’s Club since their self-titled debut album of last year.

Recorded, produced and mixed by Ross Orton, comes with an accompanying video directed by the band's visual team, Steve Hockett and IMPA TV, 'X' rides on a sustained attack and gives way to a glorious synth heavy release of a chorus.

"The video is a visual exploration of the line 'there's no start to this end', says Hockett. "Shot in a big ex-industrial fridge by IMPATV, we filmed Syd's live performance with graphic projections using live analogue video feedback."

The band have also announced a November tour, with tickets on sale from April 1 at 9am. See below.