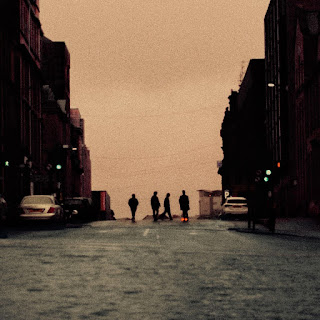 It’s been a long time coming this debut album from West Lothian’s The Snuts. A quick scroll of the band’s social media pages this week paints a picture of the blood, sweat, tears and tonic wine that have gone into making this debut album. Above all, it’s been a tremendous amount of graft and determination which has rewarded the band and their loyal fanbase with some magic moments. Perhaps most notably, tearing the roof off the main stage at Glasgow’s TRNSMT Festival in 2019 and selling out The Barrowlands three nights on the trot ahead of their rescheduled UK tour this autumn.

With big hitters like ‘Elephants’, ‘Somebody Loves You’ and ‘Always’ already out in the wild there’s always the worry that behind the curtain the rest of the album falls slightly flat, but that’s far from the case here and it’s no real surprise when you consider the meticulous effort the band will have gone to to get this one right.

Album opener ‘Top Deck’ is a gentle acoustic number with a subtle but beautiful layer of strings crouching in the shadows of the mix. You could imagine this song would be completely obliterated by jubilant well-watered fans singing their hearts out in their next run of shows, yet somehow the thought of how this song will be drunkenly received in the flesh only adds to its warmth.

‘Always’ follows and kicks things up a gear to a more familiar pace. Though it’s been out for nearly six months, it’s still as fresh and exciting as it was on first listen and the crisp production of the track coupled with the rough diamond vocals from frontman Jack Cochrane really levitates The Snuts high above any other guitar band at the moment.

The lead guitar work from Joe McGillveray is consistently impressive throughout 'W.L.' , but in particular the swagger and attitude it possesses on ‘Juan Belmonte’ oozes style and carries the track in a similar fashion to how the noodling basslines from Callum Wilson take the wheel on the next song ‘All Your Friends.’

The one that might prove to be the most commercially successful on the album ‘Somebody Loves You’ is reminiscent of that video that has been doing the rounds, with the arsehole guy that measures out all the sugar in a Creme Egg in a bid to put folk off Creme Eggs for life. Suffice to say it hasn’t put me off Creme Eggs in the slightest, but I probably don’t need that much sugar in my life. To simplify that very flawed analogy, this track’s a bit too sweet for my liking and I don’t think it adds anything to the rest of the album. Other than maybe a few thousand radio plays.

‘Glasgow’ bursts into life just when you think it’s going to be a slow-burner and it’s a blessing that it does as there’s bolts of energy shot out from all angles here which make it one of the highlights of the album which is no easy feat given how stiff the competition is.

‘No Place I’d Rather Go’ and ‘Boardwalk’ kick off the second half with some cinematic vibes and hauntingly atmospheric backing vocals which swirl in and out of the mix. Jordan Mackay’s faint and at times in and out of consciousness drums over these songs is something of a contrast to the higher tempo he enjoys across the majority of the album, but the less is more approach works brilliantly and it showcases his broad range of styles and attention to detail.

It’s something of a fine art that the band have so seamlessly managed to tie together a wide range of styles in one album without once sounding disjointed or contrived. From the acoustic highs of ‘Top Deck’ to the indie bangers ‘Coffee & Cigarettes’ and ‘Elephants’, culminating with fan-favourite and staple live set-closer ‘Sing For Your Supper’ to call time on the album, it’s a damn near flawless debut from the West Lothian quartet and well worth the wait.