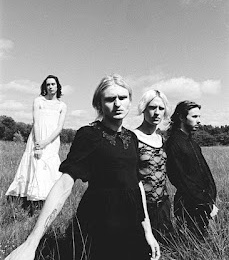 Two years ago when we first happened upon the debut single of Glasgow-based post-punks Book Klub, 'Care', we remarked how "at first [it] feels like a cross between The Smiths and Chapel Club, but then in the last 50 seconds, gives over to something - or rather, someone - else: early TOY, particularly in the vocal style of guitarist and frontman Reece Robertson - which is part Tom Dougall, filled out with a Lewis Bowman depth!"

Lauded as a "damn fine single" (and still is!), we were naturally curious about their latest single 'Siren Song', which dropped last week on Disobedient Records.

More downbeat and discordant than the above, 'Siren Song' - taken from the band's upcoming EP, recorded with producer Paul McInally - has a darker finish to its lustre, while once again employing the Book Klub trademark key change. As sharp, angular guitars play around a dizzying bassline, the penetrating vocal brings the song to a climactic end.
Disobedient Records · Book Klub - Siren Song
"'Siren Song' is a track about metamorphosis at the cost of one's humanity, and it too transforms from one thing into something else entirely," comments drummer and vocalist Jack Martin.

"On this track, we have explored a dark, trance-inducing soundscape made up of drum machines, sinister piano and reverberated bass. The song sways into a thunderous second half where we are noisier than we've ever been."
Rosie Sco captures the mood in the accompanying monochrome visual for 'Siren Song' below.