There's just one thing Talkboy want to know: 'Why Don’t You Love Me Lana Del Rey'? 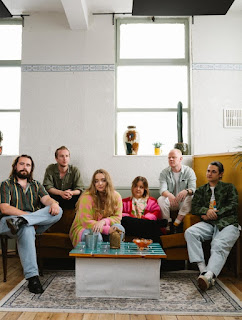 Ahead of their hometown headline show at The Brudenell tomorrow (September 3), Leeds sextet Talkboy share new single, the intriguingly titled 'Why Don’t You Love Me Lana Del Rey'.

“I don’t think it’s really worth saying exactly what the song is about as I think this one in particular gives a very clear overall mood," says co-vocalist and guitarist Tim Malkin of the woozy, rose-tinted ode to unrequited feelings and what could have been.

"I also don’t really know what it’s about," he adds. "I was getting really bored of writing super specific songs about stuff that had exclusively happened to me, and on top of that, who even cares? I think overall it’s about surface level encounters - how they are usually thought to be bad but can also be good. It was written just after lockdown one and I think I had quite a romantic yearning to speak to someone outside a pub about Neil Young in 1974.”

Created and produced by 10 Days, the video for 'Why Don’t You Love Me Lana Del Rey' tells a dark tale of bliss and revenge starring an adorable purple monster falling in love with a Lana Del Rey lookalike. The film was part of a unique brand collaboration with the crowd sourced sustainability platform Wherefrom.