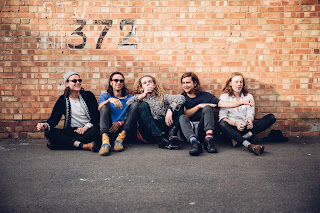 With a title like 'Banana Tsunami', the new single from South London rock 'n' roll funksters The Shakers, out this Friday (April 14), rather conjures up a picture of being submerged in a humongous cascading torrent of yellow fruit. With relief, it can be said the title can't be taken literally.

Recorded at Red Bull Studios in London with Louis Fulford-Smith, 'Banana Tsunami', which Little Indie is stoked to be able to premiere ahead of release, is title track from the band's new EP.

The track, say the band is based on a theme they have been wanting to work on: "The song explores the idea that in modern society sexual attitudes sell, no matter what they endorse, and how that idea has undeniably filtered down into culture and into the way that the world acts and presents itself."