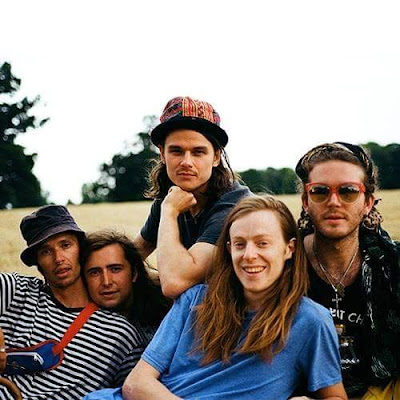 
Remember 'Banana Tsunami'? The South London 'disco rock' five-piece The Shakers caught our attention then, and now they have just released their rock 'n' funk single -  their first self-produced effort - 'Get Me Down', via own label Infinity Cactus Records.

We’re all from London and are based just round the corner from each other, south of the Thames. We’re all childhood friends and two of us are family. We’ve been playing together for a couple of years now and things have been going pretty good so far! We’ve been lucky enough to play at Glastonbury twice, release two EPs, get some awesome radio play and are currently releasing a new series of singles of the next few months, the first of which, 'Get Me Down', is out now. We’re blown away by the support we have received recently so are just trying to make the best music possible!

Our musical style has become a hot soup of styles. Spawning from a childhood love of indie rock, we journeyed steadily backwards on a road to the disco halls of 1970s America, via Prince’s monolithic archive and deep into the funkadelic back catalogues of George Clinton. We mixed this with some more modern influences of the Red Hot Chilli Peppers, The Virgins, and LCD Soundsystem and coined the term ‘disco rock’ and think it fits pretty nicely.

As a group we have a really varied range of influences and a lot of the songs are usually born from one idea that sparks another until we have a finished song. It’s very rare that one of us will bring a song into the studio and it’s completely finished. And even when that does happen, it rarely stays that way for long. On the production side, we like to say we have a total DIY mindset and we like to have control over most aspects, from recording to production to the mix, and the real fun of that is to try and get all of our individual tastes to come through as a cohesive entity. It really becomes a brainstorm of ideas, sounds and rhythms.

This single is the first time we’ve really moved into doing everything ourselves. It’s based on the idea of how dancing to your favourite song can be the only important thing on a bad day. It is super synth and bass-heavy, but has a killer guitar solo at the end. We feel it’s a big step up for us so we’re really excited to get it to everyone!

We have had an incredibly busy and fun summer schedule of gigs and festivals and after a sell out show at the Moth Club in London. We have been taking a little break, but worry not as we will be coming back to the stage at The Finsbury on October 25 as part of Blogtober.

It’s looking like an exciting and great year and we can’t wait for what’s next. We have some new music coming out before the end of the year and a couple of exciting shows dotted around London on the horizon too. At the moment we’re just trying to keep things going and make as much music as possible, so that is the plan for now. The world is our lobster and it’s just a matter of opening the clam.

We are all over the usual places: Spotify, Apple Music, etc., but you can also find us on Soundcloud. We are also selling some CDs and vinyl records on our website for more analogue fans.