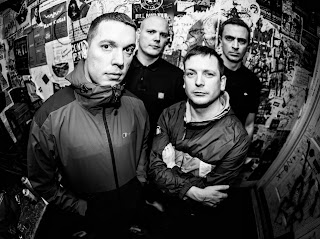 York-based rock n rollers Skylights
are the newest acquisition to Manchester label 42’s Records, for whom they have just dropped their first physical single 'Enemies' for. The release comes after the four-piece have racked up a collection of positive live performances in small venues, as well as extremely enlightening interviews which even lead to a standout performance on SoccerAM, leading them to being tagged as a ‘band of the people’.

The anthemic 'Enemies' displays plenty of hallmarks reminiscent of old school Brit-pop, with their lyrical inferences relating to going against the forces that seem set to sometimes hold you back; doubled with a rebellious, driving post-punk influenced energy, it’s definitely a song to make a live crowd go wild - when the band next get the chance to play to one, that is.

Skylights definitely show a formula geared for success, with a polished confidence and wide appeal.