Track Of The Day :: SPINN - Stuck On A Feeling 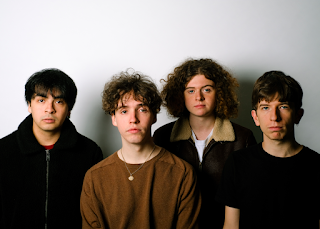 Liverpool’s psychedelic pop quartet SPINN rounded off last year with a monumental hometown show at a sold-out 1200 capacity 02 Academy. It was the cherry on top of the 2019-shaped cake having released their long-awaited debut self-titled album earlier in the year to a crescendo of pleasantries.

With such a strong end to the year, as was the case for many others, 2020 looked like being the biggest yet for the band. Then you know what happened -and the plug got pulled on the treadmill and gigs just ground to a halt overnight.

Still, the band haven’t let the small matter of an unscripted worldwide pandemic halt their ascent as they’re back with new single, ‘Stuck On A Feeling.’ Following on from the sunny and shimmering tones of their album, this has similar generous quantities of Vitamin D which is great news for those of us that haven’t been outside in about three months.

“I've recently been struggling to get asleep a lot, which to be honest I'm kind of new to, so at first it was such a frustrating and anxiety inducing thing, that I felt I had to write about it," explains lead singer Johnny Quinn. "This song is like a prayer for sleep, although I think when you listen to it, you'll find the music itself has the opposite effect.”

On the first few listen it’s not a million miles away from the territory covered on their debut, but given the following they've amassed off the back of it, and the sound they’ve been tirelessly refining since 2015, it’s probably a good call. There’s still more than enough on here to enjoy with a thumping bassline ever-present throughout and any similarities to its predecessors are certainly not to the band’s detriment.

If you’re wandering around your local park on your lonesome in a bucket hat with a warm cider and a Stone Roses t-shirt still trying to come to terms with TRNSMT being cancelled, this will cheer you up massively and tide you over until festival season returns.