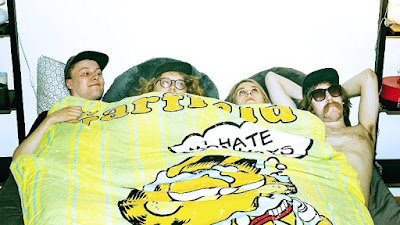 Despite not being able to pronounce 'Niin kuin se ennen oli' ('As It Was Before'), or knowing what it is about, this new single from Finnish alt-rockers Bad Sauna is remarkably catchy and easy to get with 'oli'.

Released last week via All That Plazz, the grungy Helsinki four-piece follow their debut single on their own label 'Need Money for Records' in late 2019, and 'Moon Sun' earlier this year, and precedes their planned first full-length due before Christmas.

Vocalist Felix Lybeck lets rip over a barrage of guitars and drums on this delightful middle finger to middle-aged bores that was created spontaneously as he and guitarist Santeri Hytönen were sitting on the rocks in the Vallila district of Helsinki waiting for their practice session to get started.

“Right then we were particularly pissed off with middle-aged bores. I suggested to Santeri that we should write a 'Fuck off' song, so we did. Fuck yeah!” says Lybeck.