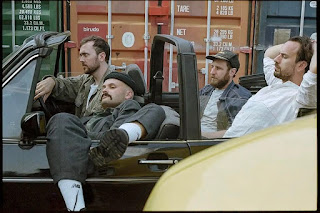 After two biting tracks so far this year, ‘House Of York’, and ‘Runner Up’, incendiary post-punks TV Priest now throw out a third - along with the announcement of their debut album.

'Uppers' is set for release on November 13 via Hand In Hive, physically on both CD and LP, which will include a 300 limited run in coloured vinyl through Recordstore.

Ahead of the full-length, they introduce 'The Island' this week.

"'This Island' is about incoherence and inarticulate responses, both personal and political, in a time and place you don’t fully understand anymore," states the London-based band's frontman Charlie Drinkwater, whose distinctive vocal approach helms this vital new banger.

"It’s an unrequited love letter, and a howl of frustration; a mea culpa and a call to arms. We wrote this to an increasingly nationalistic and isolationist drum beat playing out at home and abroad, and frankly we are scared and appalled.

"As artists we aren’t offering up solutions for living, but maybe we can extend a hand and let someone know that you aren’t alone in feeling under prepared in your responses yet powerful in your convictions.That small boats can still make big waves. That we have a world to win."

Check out 'This Island' via Ewen Farr's animated video.