Watch :: Tiger Mimic share visuals for 'Where The Fire Used To Be' 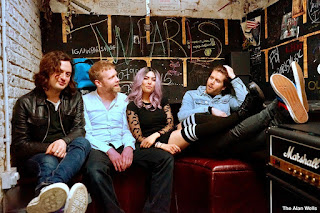 London’s Tiger Mimic have been busy during lockdown alongside producer Kevin Vanbergen (Nova Twins), recently releasing new single 'Where The Fire Used To Be', out now via End of the Trail.

Now they have unveiled their monochrome self- written, filmed, and edited video to accompany it.

The track's title refers to a dormant volcano that the band climbed once, the desolation they witnessed amidst its breathtaking scenery gave them the seed of a song about hope and loss.

The song starts with the crack of drums as Bram Johnson’s fast guitar intertwines with his vocals, soon calmed by Jess Rhodes's soothing delivery - which is reminiscent of the 60s and the way bands would mix different styles into a track, but with a 90s rock guitar mash-up twist.

Check song and video below.