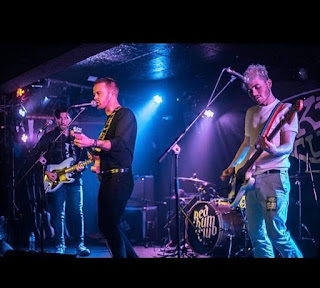 Hi, my name is Adam McMonagle and I sing lead vocals and play rhythm guitar in the band. Beafets was formed by me and my high school friend John Loughran (lead guitar) after bonding over a shared appreciation for guitar music in our teens. From there John recruited one of his childhood friends Aaron Johnston on drums, and in 2019 Scott Taylor completed the line-up on bass.

The story of Beafets is one of shaky beginnings, solid foundations and unknown potential. Beginning in high school as a creative outlet between two friends, they quickly found themselves rehearsing in the back of a tanning salon as a four-piece with dreams of playing a live show. Over a few short months in 2015 Beafets released two home record singles (one which is now lost to the sands of time) and played a string of live shows supporting the likes of Beach Baby, Willie J Healey, The Ninth Wave and The Lapelles. Then as soon as they arrived, they were gone.

A few years later and in a reformed line up Beafets have returned and intend to make a lasting impact this time around. Beafets released their first studio single ‘Rules for Fools’ in January 2019 and were praised for their ‘breezy summer charm…enticing vocal draw’ and ‘betraying a charming vulnerability.’ Reinvigorated by the reception, their second single ‘Rotary Dial’ which received airplay on Jim Gellatly’s Amazing Radio show and featured on official Spotify playlist ‘Scotify’. Third studio single ‘TV’ finished a trilogy of songs marking their transition since returning in 2019. Documenting a turbulent period in their lives this collection of songs are tied together sonically and visually,  taking songs from before their hiatus and building them into pieces which mark the trajectory they wish to go in.

Our early influences include 2000s guitar bands such as the Strokes and Bombay Bicycle Club combined with 1980s bands such as The Replacements and The Cure. Over the years our musical inspirations have expanded into hiphop with the likes of Frank Ocean and Mac Miller. Going forward we plan to expand our own sound and tie together some of these influences in our own music.

Our new song was written acoustically in 2018 in a much more minimalist form and shelved due to not knowing what to do with it. Once brining the song to the band, the newly formed drums and guitar sections injected a level of energy intro the track that led us to introduce it into our live sets. The track was well received live and even had audience members attempting to sing along despite not knowing the words. This led us to the decision to make it our next single. It was produced by Jamie Holmes who also provided backing vocals and altered some of the arrangements, particularly in padding out the chorus sections.

It is a song about reflecting on a turbulent ending to a failed relationship. When singing of being ‘tired of being innocuous, and winning all the fights’, the song highlights how a relationship can become toxic over time and partners can go out there way to fight with one another just to keep things exciting. Ultimately though the song is an upbeat reflection which aims to signal that the situation is over and everyone is better for it.
Beafets · Open Letter

We plan to release a few more singles and return to the live scene whenever possible with a headline show in Glasgow and wherever else we can.
Where can we hear more of your music?
All digital platforms - Soundcloud, Spotify, YouTube, etc.