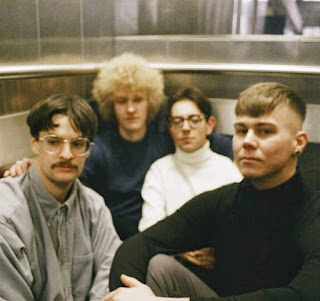 The just released 'Hands Up' - premiered on BBC 6Music by Steve Lemacq - is the new single from Portsmouth-based, post-punk four-piece Hallan, and a taster of their debut EP,  ‘Reporting Live From The Living Room Floor’, to be released on July 16 through Nice Swan Records.

Hey, we're Hallan, a Portsmouth-based band. My name is Adam Mills and I play drums in the band. The other members include Conor Hallan as our frontman/vocalist, Josh Ransley on guitar and Josh Tweedale playing bass.

We are all from Portsmouth and some of us have known each other since school, while some know each other just from frequenting local alternative nightclubs. The finalised line up of Hallan was formed in February 2018 with the addition of myself on drums, and since then we've experimented with our sound, never quite pinning down a definitive genre. Always finding new inspirations, musically and personally in our lives.

There's such a wide array of influences that could be attributed to the Hallan sound, with some of us listening to bands such as The Murder Capital and The Stranglers, through to The Velvet Underground and The Beach Boys. However, the Hallan style is something forever moulding itself into its next form, with no real plans on limiting ourselves musically to specially fit into a genre, for future projects.

Conor writes a lot of our music currently with us not being able to get into a rehearsal space. But we do write music as a unit when were together quite comfortably. Production wise, we like to have as hands-on of an approach as possible. We tend to have quite strong concepts of what we want each song to sound like and the fictional world that surrounds the characters we create in our music.

With 'Hands Up' we aimed our sights at the brutality of the business world and the bandits found within, wrapping it all up in satirical commentary. Our last two projects were recorded at Ford Lane Studios where we felt relaxed and able to push ourselves creatively. With Theo Verney mixing and Julian Tardo mastering, which is a great backing of talented people helping us progress our music to the next level.

I'm sure for everyone 2021 holds a lot of optimism and also uncertainty, which goes for us as well. We're hoping to be back to live shows (with us being very much a live band) whenever that is safe to do so, and there's our debut EP out in the summer, which includes 'Hands Up', plus five other tracks: 'Reruns', 'The White Boys', 'Orwells Idyllic Future', 'Television Show' and 'Prime Time Lullaby'. In the meantime, we will be working hard behind the scenes to get more music out to people and prepare ourselves for normality again.
Where can we hear more of your music?

We have our music on all major streaming platforms, such as Spotify, Apple Music, Soundcloud, YouTube, Deezer, Tidal, etc.