New West Mids arrivals Watermark stamp their impression on Sing & Tell as they talk about friends, departures, and their debut single's story 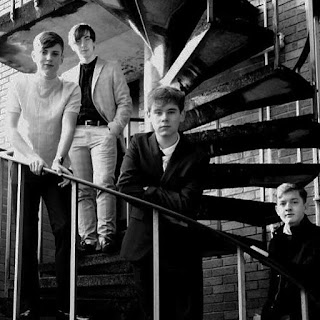 The debut single 'The Morning After', from West Midlands alt-rock quartet Watermark, has certainly been making an indelibe impression since it dropped earlier this month. Described by promoters This Feeling as "a debut of staggering quality", expect more to come as this was just a taster cut from the band's forthcoming EP 'Hickman Avenue'.

The band was formed by three friends at Ounsdale Secondary School in 2018, and on the search for a guitarist found Andrew, after our first frontman had met him on a train, and got talking about music. He then became the band's lead guitarist. One year later, Cameron was recommended to be rhythm guitarist. After a musical disagreement, the original frontman, bassist and drummer all left! Andrew then stepped up to lead vocals, and shared out the lead guitar with Cameron. Sam was suggested to the band via another mutual friend. As he was a guitarist, he was convinced to switch to bass guitar. Joshua was recommended through a local drum teacher.

The band's main influences come mainly from the 60s, in particular, The Beatles. We also take inspiration from the likes of The Who, The Clash and The Jam for our own 60s style, with 70s energy, and a 90s attack!

Often, Andrew or Sam will write the general core of a song on their own. The two then work together to finalise the other aspects of the song. Throughout the writing process between the two songwriters, it is always completely separate until they come to record the song, and attempt to perfect it.

Our debut demo track ‘The Morning After’ was written by Andrew, and is about an old friend who would often get led astray and fall in with the wrong crowd and now cannot seem to get out of the cycle. It’s a very heavy, riff-orientated track.

For the remainder of 2021, we are releasing a debut EP ‘Hickman Avenue’ (named after the industrial estate we used to rehearse on). ‘The Morning After’ is already available on all major streaming platforms. The next demo track is set to be released on 6th March.

We are on all major streaming platforms - Spotify, Soundcloud, Apple Music.