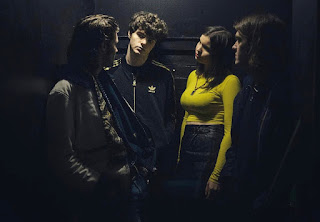 “Initially it seemed a bit of a crazy idea,” says Syd Minsky-Sargeant. “To go and remix an album we’d just made that wasn’t even out yet. But once we got into it we were like, ‘let’s fucking go for it’."

He adds: “Ross has a studio in Sheffield and I have a bit of one at home. So I would play a synth part and then send him the file over and he’d put it into his computer and then bring it up on a shared screen. I could see his interface and we’d mix it like that. It was like being in the same room.”

The result is a “reinterpretation rather than a remix. It takes a number of parts of the album but different versions [and edits] of the songs. I’ve played new parts on more or less everything. Some tracks I’ve taken out the guitar parts and re-done them with synths or replaced bass lines with synths.”

Stream in full below.