The Pretty Visitors Sing & Tell on 'Western Skies', writing, recording - and their unique use of a Hoover! 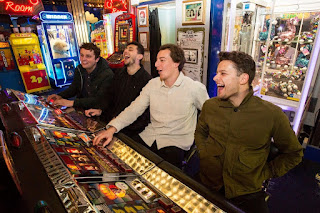 Portsmouth-based indie-rockers The Pretty Visitors have just released their latest single, ‘Western Skies’. The driving track with its big chorus build is the follow up to last November's 'Head in the Sand'.

I'm Connor Reid and I sing and play guitar in The Pretty Visitors. Sam Bennett is on bass, Jack Rudland's on drums, and Aaron Evans is the lead guitarist.

We're all based on the south coast from Portsmouth to the outskirts of Southampton. Three of us met at college and one joined after coincidentally meeting on a football trip in Amsterdam. Before that none of us had really played properly, maybe the summer before I had begun to write bits and bobs but nothing much. It was immediately apparent that Aaron and I shared so many of the same musical tastes straight away and we always loved talking about music and what it meant to us. We swapped CDs, taught each other bits of guitar and just organically started creating things. When Jack and Sam joined something just seemed to click. It became an instinctual need to create something and comment on our lives, and each one of us complimented each other easily to make the songs the best they could be.

Our style would be described as indie, but the songs have different undertones from blues to spoken word to psychedelia, I think our style is really fluid in that way, but still recognisable as distinctly ours. We all have really varied tastes and influences, but there are some artists we all have a mutual love for. All of us love Oasis, Arctic Monkeys, The Strokes and The Rolling Stones, so I guess that’s the four cornerstones to our collective tastes - but then individually those wouldn’t even make it into our top five artists, so it’s quite interesting in the way it all comes out in our tunes. When we write and record now, I think we’re always just inputting our own flavours to drum sounds and guitar tones that either come unconsciously from whatever we’re listening to at the time or purposely to invoke an emotion to bolster the song and its lyrical themes. Either way, it all seems to work out for us more and more as time goes on.

Each song seems to require different approaches. Generally, one of us will come into a band practice with the skeleton of an idea, and if we all dig it and jam out something half decent, it will often be taken away and lyrics will be added. But sometimes the whole song is written, sometimes the song’s three-quarters there and we jam out ideas to finish it, or sometimes it remains a half song for years until we remember it again! It’s all dependent on our moods, the idea, the music - there’s a fluidity and freshness to our songwriting in that way I guess.

Recording wise we pretty much always have the song tight and ready by jamming out before we go into the studio, and we get the bare bones done quickly. Then we like to get quite experimental in the last half a day or day and just see what we can try to add to the general atmosphere of the track. Swinging microphones, tapping floors with drumsticks, mic-ing up a Hoover and using 80s tape echo machines are some of the things that have ended up on the recordings!

We recorded in London for the first time with 'Western Skies', at East Cote Studios (Yungblud, Skepta, Rita Ora) with George Murphy producing. Musically, everything just fell into place perfectly and effortlessly, which is always a good sign when we’re writing a song. I demoed the track at home after relentlessly listening to ‘Avant Gardener’ by Courtney Barnett, and so I think that’s where that simplistic run of chords and the spoken word delivery comes from, but then the chorus just ended up massive and Oasis-like when we came together in a room to play it, and everyone added things that just built a really great and layered sound to the track. Recording at East cote was an amazing experience, as more of our live playing was a part of the recording, which gives it a unique and massive sound that isn’t quite as present on our other songs.

Lyrically, this song came from a place of frustration and helplessness in the small towns where we live. I had an uneventful day and felt like I was walking around in something like ‘The Village Green Preservation Society’ and felt the need to write about small town life along with being late twenties and not knowing what I wanted to do or where I wanted to be. As with everyone’s place they grew up in, it's a love/hate relationship, and I think this song articulates that, along with nuanced details that you can only notice about a place that you have so many memories attached to.

I think after we've promoted this single heavily (it really deserves it), we really want to record an EP - something with a longer journey that can showcase our style a bit more. After that, the whole priority is just to play a gig again! We have our fingers crossed for a future in which that's possible.

Where can we hear more of your music?
You can hear everything on any streaming platform there us - Spotify, Apple Music, Soundcloud, YouTube, etc.
What social media platforms can we find you on?
Facebook // Instagram // Twitter