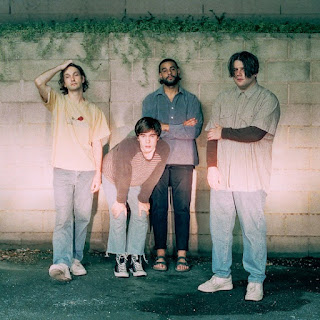 Adelaide four-piece Pinkish Blu are always to be relied upon for producing music to die for, with their emotion-driven songwriting coated in an alt-pop haze.

Little Indie captured the Australians last April with 'Red Hot Moon', and now we bring you 'Backward’, the new single. out today.

The track, full of guitar hooks and those vocals you can't resist, has been part of the band's catalogue - in demo form, anyway - for some time, with the band revisiting the track last year. Its final form here brings feelings of nostalgia and a bittersweet melancholy together, wrapped up and presented with Pinkish Blu’s now-trademark alt-pop bent.

“During COVID we felt nostalgic and were looking back on our old demos and found ‘Backward’, actually, four different versions of ‘Backward’, says singer Brice Young. "From what it was back then to what it is now is vastly different, but the core idea of the song has remained prevalent throughout. Sonically we’ve evolved to a sound we’re really comfortable with, which has given us the opportunity to be more open and wear our hearts on our sleeve."

Listen to 'Backward' here via the accompanying video, directed by Ricky Liddell.