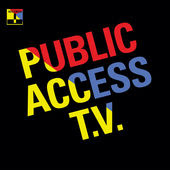 Fresh from downtown New York, Public Access T.V. are currently gigging around London, having recently performed what is probably a stand-out moment for them so far at BST Hyde Park, sharing the bill with The Strokes. After debuting in 2014 with 'Monaco',  they were quickly tipped as one of the Big Apple's hottest prospects. With the release of this five-track EP, the band continue to show their progression; and how their sound differentiates itself from the mainstream indie-rock that seems to saturate the airwaves, but is worthy of that level of popularity and attention.

Showing off their interpretation of shoegaze styled alt-rock, Public Access T.V. bring a delightful addition to this sub-genre that is experiencing something of a modern revival with many UK acts like Beach Baby and Oscar experimenting within this area too. In its entirety this is an EP that comes across effortlessly, with lose electric guitar chords and solos, light drumming, and a hazy vocal courtesy of John Eatherly, and offers a soundtrack for an immensely enjoyable and relaxed summer.

A poignant lyric from second track, the sultry-paced groove of picked guitar that is ‘All We Want’, encapsulates the spirit and essence of the record, as Eatherly sings “it’s a feeling wrapped up in a melody”. There's plenty of melody too in lead single 'Metropolis' - “There’s no need to be an asshole, you’re not in Brooklyn anymore” - the alt pop-rock track that delves into 70s garage around a foot-tapping beat and robust guitar riffs that shape what PATV are about.

Final track ‘Tracy’ is mesmerizing, worked around swirling synths and hypnotic guitar strains. This track acts almost as a tribute to The Strokes’ ‘Someday’ -  the lyrical comparison is unmistakable. Here, we have the line, ‘I really wanna live in the old days’, versus The Strokes’ Casablancas who sang:“in many ways they’ll miss the good old days.” There can’t be a person out there who doesn’t enjoy revisiting and indulging in good things from the past, but Public Access T.V.  are revisiting and reviving old sounds with an exciting modern twist - and it’s exactly as uplifting and enjoyable as it should be.