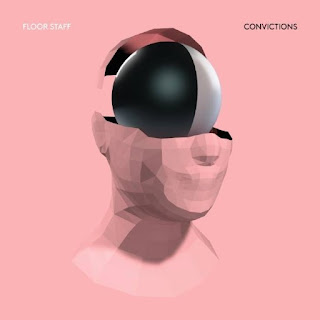 This is the second EP from Dublin-based Anthony Donnelly, the producer and composer known as Floor Staff, and follows his acclaimed debut ‘The Good Luck EP’ which saw light of day all of three years ago.

With this new work we see him lyrically confronting bereavement, fidelity and self-esteem, cathartically transforming these concerns into joyous pop expressions, while musically playing "various random objects, not necessarily to capture how they sounded, but to evoke a particular type of emotion or to work as metaphors for lyrical content." The result of this aural 'kitchen sink drama' (scraping kitchen knives together were in fact part of the unusual hardware array) is something that is both well-crafted, and, obviously, rather unusual and ingenious in its making.

The five-track EP opens on 'Choice', with one of those intro's that sounds like someone running their finger around the rim of a glass; eerie, discordant, its ideal live setting would probably be a church for the acoustic amplification. 'A Love Sublime' picks up the pace and meanders on a steady beat of some of those 'random objects' set against Donnelly's high vocal line.

'Saviour' is a more alt-pop piece with some lovely instrumental workings, synth beats and a chilled vocal. But it is 'Adrigole' that stands out as it breaks out big blasts of a foghorn sound (we are informed this is a synth which was run through a blues junior tube amp to give it the 'big distorted sound and some warmth') impinging on the more subtle vocal around it and tinkling piano notes that come in here and there. It's a curiosity in its structure and one you're moved to repeat hear, before the slow-burning and intense 'Mold' closes the record, here effectively employing the chime from a grandfather clock (which in fact belonged to Donnelly's grandmother) added to an emotive vocal and finger plucked guitar chords before opening out to introduce further instrumentation. It's a bit of a lyrical emotions-tugger too. Always good to keep your audience wanting more - which you will after this all-too-short offering.