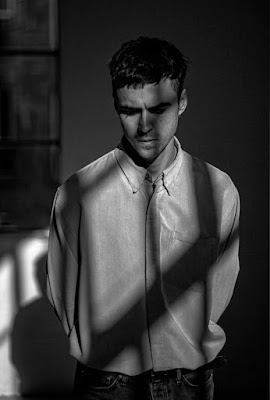 It may sound stupidly obvious, but life can be really, really fucking class when you realise you're alive."

Daragh Griffin, the vocalist and guitarist of Dublin's newest export, Odd Morris, is sitting in the smoking area of Yellow Door Studios rehearsal space in East Wall. It's a familiar stomping ground for the singer and guitarist, and somewhere he and his three band compatriots have spent much time over the last years; something that they share with fellow Irishmen Fontaines D.C. and The Murder Capital. Set on an uninspiring industrial estate, it's not one of the Dublin's most eye-catching attractions, but the facilities have become a hub hotspot for local musicians.

"Yeah," he grins, as he takes in the surroundings, "Carlos from Fontaines D.C. told us about their rehearsal studio in East Wall, and since then we've been in here with all the other bands, we've been a lot more focused. Hearing The Murder Capital rehearse 'For Everything' will do that to you!"

It's hard to get away from The Murder Capital, not just hailing from same city and sharing same rehearsal space. There will be thoughts in the back of many fans' minds of another Dublin band, who, like Odd Morris (the name stemming from the author of a school maths book, named O.D Morris), had just a couple of tracks online and a few gigs under their belt, before playing a SOMA session early in 2018 - as did Odd Morris last year; see part one of this feature - that quickly caught attention and catapulted them 12 months later to a Top 20 debut album, a sold out string of shows and general approbation everywhere. I ask him if he knows who I am referring to?

He smiles: "Our boys, yeah." By "the boys" he means, of course, The Murder Capital. 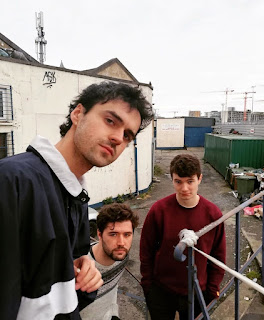 Three of the band outside
Yellow Door Studios
How did you come to do that session? Did you feel any pressure of expectation resting on it for Odd Morris?

"We were approached by SOMA back in March about the video, but decided to wait until festival season to shoot it--

As a potential single, or as part of an EP?

"No, not at all. The SOMA video was literally an opportunity to fan the flames around festival season. But I don't think there's any expectation on us at all really, to be honest, or at least as much as there would be for any other band. The video for us was an opportunity to release another tune for free so it was a no brainer."

Was it just 'The Nothing New' you did for them?

That has such a strong opening, the first 20 seconds or so, and that bassline with the dark guitar riffs coming in, really strike a moody, spine-tingling line.

"Mac's [Ciarán McCarthy] bass and Sam's[Martin, drums] beat complement each other nicely. It all came about really quickly I think. Kris [Hassett, guitar] just started strumming that single chord one rehearsal and it pricked my ear . We just built around it then, good old trial and error."