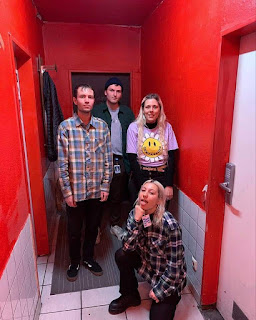 Following 'Breakdown' from earlier this year, the new single precedes their debut EP, 'Party Food', to be released on June 12 via Chess Club Records.

“'Space' is about the emotion of putting your feelings on the line and how tormenting someone can be when you break up," reveals vocalist and bassist Jess Eastwood. "The control someone has over you when they know something you don’t want others to know.

“We wanted the video for 'Space' to distract from the seriously dark tones of the song with a cartoon about a load of animals on a distant planet. Cam gives an insight into how a dog army and cat army would fight over a new planet, before coming together thanks to a common enemy.”