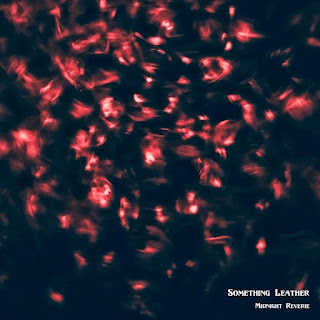 The Nick Cave & The Bad Seeds inspired Brighton trio Something Leather spent the lion’s share of 2019 laying the foundations for their debut EP with a host of shows in the UK and wider Europe to both sharpen and refine their sound and build a small army of fans. Alongside an extensive touring schedule, the band found time to release four singles, ‘Sip the Thrill’, ‘Wipe The Dust’, ‘Lullaby’ and ‘Velvet.’ With every band on the planet’s touring schedule being fairly obliterated by an undercooked bat this year, it’s something of a saving grace that Something Leather have an EP up their sleeves to keep the plates of momentum spinning.

Debut EP ‘Midnight Reverie’ opens up with ‘Trip To The Sun’ and it possesses an intro that could be mistaken for a dial-up internet connection, which given the way we’re going this year I wouldn’t put past making a comeback. It’s clear quite early on that the track almost feels like a hologram projection of what it would be live. It’s pleasant enough but you get the feeling if you were to witness it and all its raw energy in the flesh it would be a far superior experience.

‘Farewell Fareworse’ is a slightly less foot on the neck experience and significantly more accessible, though as a result it lacks the same demand for attention the opener carries. Having said that, it’s good to see a balance and bit of sound experimentation from the three-piece so they’re not self-isolating themselves in the pokey confines of the psych-grunge room.

Three quarters of the way through proceedings, ‘Midnight Dive’ throws up another curveball with some majestic guitar and synth work from Greg Pass (guitar) and Phillie Etta Jane (vocals/ synths/organ). Of the three so far, this one definitely releases the most dopamine and its carefully mapped out journey is definitely one to revisit.

Closer ‘Down Another One’ returns to the ghost train sounds of ‘Trip To The Sun’ with an organ heavy and wailing guitar stalking you at every corner. There’s enough to keep you listening, but it doesn’t seem quite as well structured as its predecessor which takes the crown for best of the bunch.

As debut EPs go, there’s an impressive range spread across the four tracks here and it’s definitely worth a few revisits which might change your palate over time if you wouldn’t ordinarily order from the psych menu. More than anything though, ‘Midnight Reverie’ reflects a band rich in ideas who should have an exciting future ahead of them when they’re allowed back out of the house again.