False Friends Sing & Tell on coming together, Glasgow and new single 'Dress Like A Tourist' 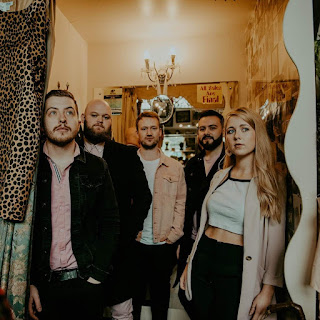 Most of us are originally from Omagh, Co.Tyrone in Ireland and we met our drummer Callum when we moved to Glasgow; he is from East Kilbride. Anna moved to Glasgow for university and she got us a gig here for our previous band, Don’t Shoot. When we came here for the gig, Fearghal and Jonny got offered a job in a pub and decided that they would stay. I followed about five months later.

Glasgow had a huge draw for us because probably our biggest collective influence is Frightened Rabbit, and the city seemed to really nurture that indie/folk style of song-writing that we love. We all listen to and take influence from a lot of different artist such as Pinegrove, The National, Arcade Fire and Manchester Orchestra. Although not really sounding like anyone who influences us, we kind of create a blend of indie pop rock which we have become comfortable with.

I think we all approach writing a bit differently, but we all bring ideas for songs to a practice session and go through them, see what works and take it from there. When we have songs written, we record demos and listen back to them and make changes, which I find a really good way of working.

Our new single ‘Dress Like A Tourist’ is about trying to fit in, and almost succeeding at it. We recorded it in Magic Box, Dundee with producer/ engineer Scotty Anderson. The track features double vocals from Jonny and Anna as the contemplative lyrics explore what it is like to traverse one of the most exciting music scenes in the world.

Yeah, we are playing the Stag & Dagger festival which has just announced the rearranged date of Sunday 29th November. We are also set to play Party at the Palace on the 8th August - all being well of course. We have a few shows coming up later in the year, but they have yet to be officially announced, so keep an eye on our socials for those.

We released our debut EP ‘A Great Day For The Parish’ in November of last year, which is on Spotify. and is available for purchase on Bandcamp.