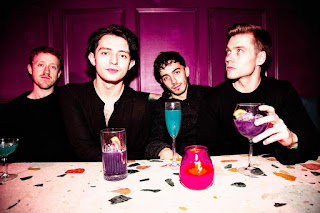 Currently hunkered down in coronavirus self-isolation, Sad Boys Club have followed up their newest single, 'Know (Pt. II)', with a music video for the pulsating electronic ballad.

'Know (Pt. II)' is the first piece of new material to surface following the London quartet's second EP 'Four Shades of the Transitional Phase', which was released last autumn.

Watch the video, edited by the band, below - then scroll on down for the few words we grabbed vocalist Jacob Wheldon for.

Speaking with the frontman, we asked about how he was coping in these solitary times?

"It’s been full of ups and downs, as I’m sure is the case with most people. We normally write the majority of our demos by sending each other ideas anyway, so our creative process hasn’t changed much. Although it’s tough not being in the same room to iron them out. We also really, really, really miss gigging."

What sorts of things are keeping you entertained?

"The usual really… I’m currently re-watching all of The Wire and The Sopranos. They don’t make them like they used to…

"We’ve also been playing loads of videogames. Check us out live on Twitch TV – we’re all bang on average."

Have you got anything planned for when we can finally all emerge, post-isolation?

"Hugging each other all the time. Also, we’ve got loads of dates rescheduled for later in the year, including a couple of tours supporting Marsicans and Slow Readers Club."

What music  has been keeping you going over the last weeks?

"I've been listening to the debut album from Sorry, and Alex Cameron, Soccer Mommy, Blake Mills. We send each other stuff all the time too. Actually, our ‘yellow wallpaper’ playlist on Spotify gives you the full scope. We update it all the time too, so go ahead and give it a follow if you’d like…"