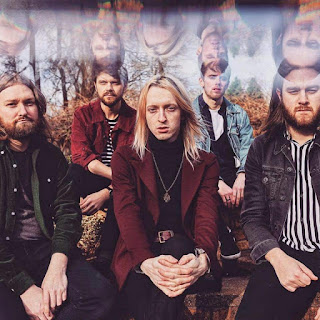 Coming after their recent 'Visions of a New Age' EP, this fifth outing from the dreamgaze quintet builds on a psychedelic haze of four and a half minutes of layers of shimmering, washed out synths and reverb-laden guitars, as Jamie Lambert's low in the mix vocal slides in the repeated chorus mantra,"So hold on / The fire in the sky / Rests within our soul / Hold on / The ocean never dies / Life has just begun", to set a tingle running down the spine.

“I just wanted to create something that had the balls of a rock track but without all the typical traits of a rock track,” says Lambert. “I feel as though our Manchester roots and the musical heritage we have has subconsciously crept through with the opening riff of the tune. The lyrics are intentionally vague but I believe it’s about a person trying to escape old habits and desires but is failing to do so, ending up in a vicious cycle. The sombre tone is disguised with some trippy and colourful phrasing though.”