Track Of The Day :: Montreal's hotly tipped Pottery are 'Hot Like Jungle' on new track 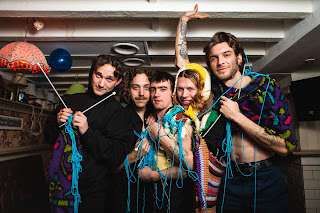 Lifted from their Jonathan Schenke (Parquet Courts, Snail Mail)-produced debut album ‘Welcome To Bobby’s Motel’, due to arrive on June 26 via Partisan, Montreal’s Pottery precede it with the record's closing track  ‘Hot Like Jungle’.

Coming with a video animated by drummer Paul Jacobs, the shimmery synth 'n' killer riff'd song was written the band say, "as a love song for Paul’s girlfriend. He had a job working construction one summer and came up with the lyrics almost as a sort of Springsteen parody, they’re very blue-collar. When Austin sings it we always picture him on a mountain shouting off into the distance with a girl out there singing back to him.”