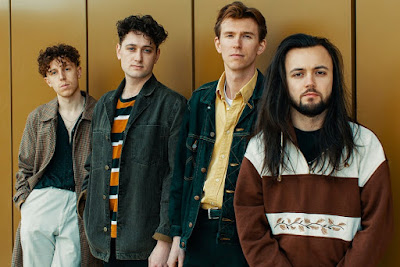 Leeds quartet Marsicans have just unveiled the official video for their latest single 'Sunday', which was filmed at their Leeds University Union show last year, and shot by their long-term visual collaborators, Leeds-based Sodium Films.

"We were supposed to be playing SXSW in Texas earlier this month and we planned to shoot a fun video for 'Sunday' while we were there, featuring a convertible and a 20-inch pizza," explains guitarist Oliver Jameson on the concept behind the video.

"Like many other things right now, it got cancelled so we've put a pin in that idea. We know for us and many people, live music and the atmosphere of gigs is such a big part of our lives. So we thought, because we don't know when we'll next be playing to a room of people, it might be good for this video for us to share footage of a fun show we played at Leeds University Union at the end of last year. Hopefully it's something we can all look forward to getting back to in the near future."

Have a watch below.