We Are Parkas Sing & Tell on 'Friday Night', remembering the 90s and virus-halted tour dates 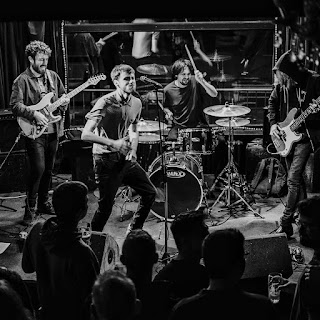 Bristol's garage rock quartet We Are Parkas - "who are old enough to remember the 90s and smart enough to know they're never coming back" - unveil their adrenaline-fuelled new single 'Friday Night' today, April 24. Recorded at Sugar House Studios in St Helens, the track is delivered with abundant attitude and a swathe of feral energy.

My name is Matt Banks and I am the singer in We Are Parkas. Other members are Joe Strauss (drums), Chris Nesbitt (guitar) and George Hopkins (bass).

We are a Bristol-based garage rock band who have been writing music and performing live since 2015. Following the release of our last three singles, ‘Catch Me Out’, ‘Thirtysomethings’ and ‘Medication’, we have performed sold out headline shows in our stomping ground of Bristol at The Louisiana and The Mother’s Ruin, as well as in the big smoke of London at The Fiddler’s Elbow and The Monarch.

We would describe ourselves as a garage rock quartet who pride ourselves on bone crushing riffs, anthemic choruses and songs soaked in irresistible attitude. In terms of influences, we like a lot of early Arctic Monkeys, IDLES, The Hives and The White Stripes. We do, however, take a lot of stylistic influences from 90s guitar bands from Manchester such as Oasis, The Stone Roses and Happy Mondays.

Usually it will be myself who comes to the rehearsal room with a song or a half finished song, then we jam it out for a few hours and and by the end of the rehearsal it's finished. Recently, this process has been working very well and we're getting a new song done every two weeks. Collectively, we're very instinctive when we're writing new material. What I mean by this is that there's a certain energy that I think we all tap into when we know we're onto something great, and the way we all feed off of that comes very naturally to us. And I think that reflects when it comes to recording as well. As long as our creative process feels exciting, we'll follow the rabbit hole down whatever mad way it ends up going!

'Friday Night' was one of the first songs we performed live as a band, and I actually wrote it before I met the rest of the guys. Ever since 2015 it's been in pretty much every live show we've done, and it's certainly been a fan favourite for years. We've held off releasing it as we wanted to give it the best platform possible as well as the best possible treatment in the studio. Luckily the guys at Sugar House Studios didn't let us down and took the song to a whole new level that we couldn't have even imagined before.

In terms of the song itself, I think it shows We Are Parkas at our rawest and most feral. The energy when we play it live is almost violent. It's just an all out, no holds barred assault on your eardrums. It's definitely one of our collective favourites and we can't wait for people to hear it.

We were actually in the middle of a 10-date UK tour before the whole COVID-19 situation arose, and we had just completed our first date which was a Bristol headline show at Mr Wolfs. We have rescheduled The Crofter's Rights, Bristol, for 4 September, Clwb Ifor Bach, Cardiff, on 5 September, 229 The Venue, London on 11th and The Victoria in Swindon on 17th. Fingers crossed they can go ahead, but in the meantime it's all about doing live streams and setting up our merch site. Rest assured, there's plenty of stuff to come from us!

You can find our music on Spotify, iTunes, YouTube, Soundcloud. Any good streaming site basically!