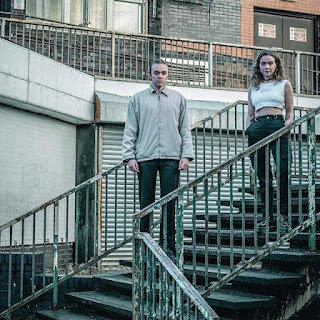 There might be a shortage of dry pasta and toilet paper but luckily there’s no such dearth of great bands emanating from Glasgow. The latest to emerge from the busy West of Scotland production line are post-punk quartet Dead Pony who have just released their new single.

Released last Friday through LAB Records, ‘Everything Is Easy’ zips along at an unrelenting pace for the brisk three-minute journey. The focused and precise rhythm section of Liam Adams on bass, and drummer Aidan McAllister, lay down the tracks for the runaway train in the form of the vocals of guitarist Anna Shields, and Blair Crichton's lead guitar and backing vocals.

"‘Everything Is Easy’ is a take on how simple childhood experiences can be soured as you grow older," explains frontwoman Anna. “Lyrically, we tried to capture that feeling of betrayal you feel as a young, naïve child when you find out Santa isn’t real or that your conception wasn’t via your Dad finding a snotter on the wall and raising it to become you. We came up with this idea after having discussed how ridiculous the things were we believed as children."

Sonically and geographically Dead Pony aren’t a million miles away from Glasgow and Kingdom Management siblings Lucia & The Best Boys and The Ninth Wave, but as with the aforementioned they’ve got their own signature style sprinkled throughout.

With more releases planned for later in the year, Dead Pony are another fine addition to the ever-blossoming Glasgow music scene and judging by ‘Everything Is Easy’ they’re the real deal and contrary to their name the four-piece aren’t flogging a dead horse.

Dead Pony · Everything Is Easy