In isolation with... Walt Disco as they release 'Cut Your Hair', drink cocktails and watch Netflix! 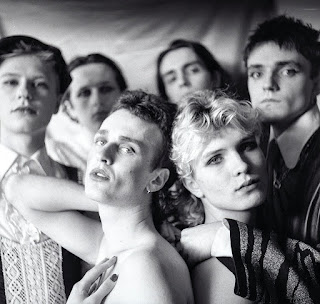 The current climate of lockdown has not prevented Glaswegian sextet Walt Disco from releasing their high energy Bowie-esque new single ‘Cut Your Hair’.

Blending glam-rock, pop, new-wave and post-punk once again, it promises to get you dancing your way through isolation with its indie-disco grooves and pulsating drum beat. Frontman extraordinaire James Power sets the single apart from all other current releases with his distinctive and powerful vocals elevating the tempo. It's a song that you need to play loud and strut around the house to!

‘Cut Your Hair’ is the perfect addition to the band's energetic-indie catalogue that is peppered throughout with dark streaks to give their music its own individual identity.

The track is also to appear on the band’s debut EP, which is on the cards to drop later this year, and comes alongside their rescheduled live shows, now set for September (fingers crossed). Scroll to end for dates.

We caught up with singer James Power to ask about the new single and how the band are coping in lockdown self-isolation.

You have just released the upbeat single ‘Cut Your Hair', what can you tell us about the song?

We wrote this song at the end of 2018 and recorded it in January this year, which is surprising as it has felt like a fan favourite for a long time now! It felt like the right time to release it was now.

We’ve been operating as our own label and have had a lot of time to put together all the elements required for it, so actually we’ve never felt more prepared to release a single before. Although when we decided it was going to come out at the end of April, the month did drag on a bit in anticipation.

How are you coping in these incarcerated days we all find ourselves in?

I’m isolating with myself, David, Charlie and Finlay from the band, Ally from Lucia & The Best Boys and Anna from Medicine Cabinet. We’re doing okay… [Blimey, if that ain't a party! Must be a music collab to come? - Ed]

What sort of things are you finding to keep yourselves entertained during these strange and unfamiliar times?

We’ve been trying to write a lot of music whilst squeezing in as much time for Netflix as possible. When the sun was out last week we had cocktails in the garden too.

Have you been making any plans for post-isolation, and hopefully when we can return to more normal times?

Nothing specific as we feel like we don’t have a timeline for when this is going to end just yet.

What music has been keeping you going during this time?

'Illinois' by Sufjan Stevens has been on repeat.