Made Of Eyes Sing & Tell on 'Honesty', influences, TikTok and sounding more 'risky'! 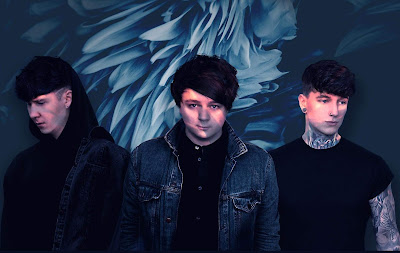 First coming to Little Indie's attention early last summer with 'Misery', Glasgow's Made Of Eyes have garnered attention with their melodic indie-alt-pop style. 'Honesty', released last month, is their newest single, and their first of 2020.

We’re an alt-pop band from Scotland. The three of us are me, JR - Jon Ross Campbell - and Jason Stewart, we’re the vocalists in the band, as well as playing lead/rhythm guitar, and Liam Browne who plays bass and synth. We all have a pretty big role when it comes to the electronic elements in the band. it’s just a really fun mix of loads of different musical backgrounds.

Me and Jason were at college together, we bumped into each other and pretty much hit it off straight away. Liam came along a little later and that's when things got interesting for us, he brought a whole new ingredient to our "music soup". This was kinda the point were the band properly started. Jason is a total cat enthusiast and is quite fond of tattoos - some might say ha!. Liam is a music production wizard and has loads of secret talents that we probably don't know about, ha! Then there’s me… yeah, I write decent songs but I mostly just waste countless hours of my life scrolling TikTok!

We’re from Glasgow, and the music scene there is such a great thing to be a part of. I mean let's talk about the heavy hitters for a sec… Lewis Capaldi, Saint Phnx, Twin Atlantic, Biffy Clyro and Paolo Nutini to name a few. We’re really influenced by some of the smaller artists that are making huge waves in the Scottish scene as well, like 100 Fables, Fatherson, Vukovi and The Nickajack Men. We take a lot of influence from bands that blend loads of different styles to make something really unique, guys like Imagine Dragons, The 1975, Twenty One Pilots etc, it’s just really innovative!

We all have a hand in the writing and (interestingly) it can sometimes range from things such as, pitching to each other lyrics; melodies; recorded demo sessions; and then we’ll all work off of what’s being pitched and each other. Other times can be situations where someone presents whole songs, already there (musically/lyrically) and conceptualised. Because we all have an individual style of writing, we’ll come away with such a wide variety of songs. It’s really refreshing for us and changes things up from time-to-time. We’ve been experimenting far more now that we’ve got a handful of singles under our belts, with a little more unusual track, giving more freedom to try things that are sounding a bit more “risky”.

'Honesty' is probably our best track yet. It’s about the how every relationship has its struggles - it’s never a perfect thing, I think that's what this track shows. Not being forthright and judging a person for their actions even though your own actions are just as bad. There's such a vulnerability to that and the hardest thing in anything is showing that to the people around you. The track has had some amazing features. It got aired by BBC Radio and was made ‘Single of the Week’, which was totally humbling for us! ‘Honesty’ really marks the direction for our band going forward, musically and visually with more music coming really soon!

Sadly due to Covid-19 we don’t have shows planned; all we’re looking to encourage at the moment is that people stay at home as best they can and we’ll have things lined up in no time when things are better. We have a few things planned already for 2021, we can’t go into too much detail quite yet, but we’re working to hit festival season pretty damn hard!

You can find our music on pretty much all major platforms: Spotify, Apple, Amazon Music. Also, with some additional things to come, through our YouTube channel and Soundcloud etc