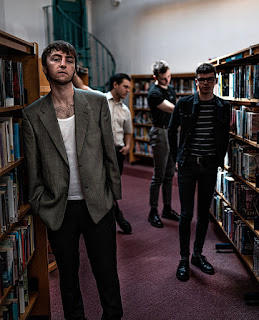 Scottish four-piece Pleasure Heads are back with a new single, a quick follow up from their March release 'Sick Of The Sights', and 2019's 'Excuse The Filth' EP.

Produced by the ubiquitous Chris Marshall and Johnny Madden and unveiled last week via 7 West Music, 'War & Orange Juice' finds the band nailing the times in the lines that run, ”Catch a cold waiting for the train / decide to find a cure while I'm delayed / then another sneeze blows away faith and / I give up for God's sake" - although the song was written late last year before such words impress with a different meaning to intended.

The Glasgow-via-Falkirk Pleasure Heads put the coruscating lyrics across with an early punk panache with a fuzzy topping, delivered effectively by rasped tones of frontman Euan Purves over a vigorous backdrop of drums, sharp guitar riffs and an unyielding bassline.

With a bunch of shows postponed due to you-know-what, you can't help but feel that when life returns to normal, Pleasure Heads are going to be a force to be reckoned with.