Pottery turn on the ‘Hot Heater’ 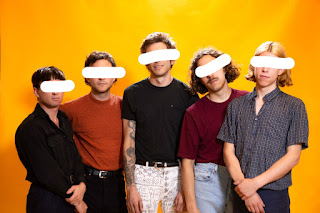 Montreal outfit Pottery follow up last month's share of 'Hot Like Jungle' with another banger from debut album ‘Welcome To Bobby’s Motel’, out on June 26 via Partisan.

‘Hot Heater’ opens on a casual groove, before it moves into a robotic Talking Heads territory jam.

"While there are hints of environmental themes on this one, we mainly wanted to make a disco song with a robotic feeling, something that could be easily chanted," they say. "Austin was originally really interested in heat as a musical concept/feeling - some of the early album titles we threw around were Hot Hot Hot and Sun Fever - and there are a bunch of other heat references on the album. In the studio he’d be joking around and yelling stuff at us like 'let’s make it hot!' right before a take. A lot of that didn’t end up totally sinking in, but some did... like on this song."