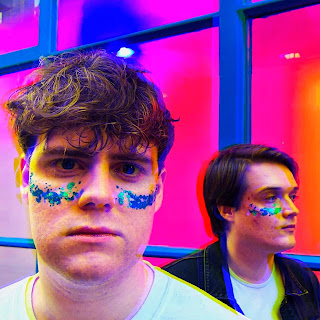 London-based ambi-pop two-piece Hoofa are back tomorrow (May 8) with a brand new stirring single, 'Alone'.

Recorded at "Hoofa HQ" - the band's studio in London - and then mixed by Ed Heaton in Leeds, and mastered by Barry Grint (Everything Everything, Foals), we bring you an early listen to the track in our premiere.

Written over last Christmas at vocalist/guitarist James Rooney's parents' house which he converted into a multi-room recording studio, 'Alone' evolved when Rooney and bassist and producer Alan Thompson "were struggling between the songs feeling cheesy and being honest and authentic," says Rooney.  "A late-night / early morning vocal writing session in the kitchen/vocal booth brought out the main idea behind the song, that 'I can't do this on my own', and that you need other people to help you get to where you want to be."

Building from a haunting opening, Rooney's vocals are slowly joined by an uplifting tempo that carries the song along two and a half minutes, lending a juxtaposition to the lyrical content. It's a more reflective offering from the duo, after last autumn's bouncy 'Lve' and dance-orientated 'Dance With You'.

"The long build-up to the main energy in the song... we did this on purpose to reflect the time it took us from thinking we can do it all ourselves, to really understanding that you need help along the way and that it's fine to ask for help," Rooney adds.

Get your ears around 'Alone' right here, below.