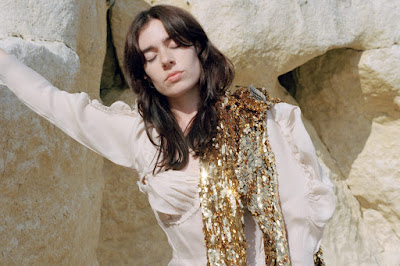 Ireland's songstress and poet Sinead O’Brien has shared a new track, ‘Roman Ruins’, which comes from her debut EP, the Dan Carey produced 'Drowning In Blessings', set for release this summer through Chess Club Records.

“Written while living in the mansion with fifty people in Hampstead; a sudden realisation occurred," she explains. "It allowed me to see in the brutal light of day. The illusion was collapsed. Exploded. Statues, monuments, clay and ancient structures emerged... A hidden city. The city wants to stay hidden. This is the blind spot.

“All four of my bedroom walls faced a different room or hallway. It was set up like a boxing ring. I could hear multiple narratives, coming from all directions even in my sleep. There were ‘episodes’ reeling in my mind through the night and into morning. The relentless sounds, conversations.

"Images from the lyrics are also heard in the musical arrangement. ‘Standing still will kill you’; This shuffling drum, checking in and out like the rug pulling from underneath the feet. Unsettling the foundations. Revealing the ground under. The drum has this magnetic raw power over the other elements - almost tidal. I love this bossiness.”

Listen to ‘Roman Ruins’ below.