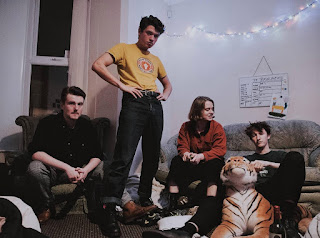 Little over a few weeks since they unleashed their fierce debut single ‘Leave it Out', Liverpool’s new-wave four-piece STONE waste no time in firing off another.

Back in our Track of the Day hotseat with ‘Keep Running', out today (May 1), this latest offering serves up all the raw energy and near illegal levels of swagger its predecessor carried by the bucketload.

As we enter a third month with the same four-walled familiarity, new music is as important as ever to keep our sanity levels in check, ‘Keep Running’ provides a welcome four minutes of escapism to lift the spirits and brings with it an assured sound from all four corners of the band, with frontman Finlay Power leading the charge.

Having gone through something of a Medusa-like transformation, metamorphosising out of a former band (The BOHOS) into STONE at the tail-end of last year, the group joined Alan McGee’s Creation Management label alongside another Little Indie favourite, Shambolics. Flying the flag for an exciting new label, Power and his STONE bandmates have in a short space of time shown themselves to be a silver lining we can look forward to gracing our favourite local venues when we’re out the other end, and a band to be heard on the tastemakers' lips.