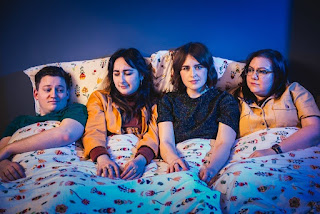 We have already heard Cowgirl's 'Wasn't Listening' and Priestgate's 'Now' from the upcoming ‘New Additions: Vol 2’, a compilation from Long Division Festival featuring artists who had been scheduled to play at this year’s festival. Next up is Glasgow four-piece Lemon Drink with ‘Manic’.

The compilation - to be released on August 21 and available to pre-order here - will share all profits between the artists involved, with the vinyl edition pressed and supported by record label Last Night From Glasgow.

'Manic' is a tasty, three-minute slice of slacker indie-pop, and follows their debut EP 'Better Run' which dropped back in March.

“'Manic' was written to call out the 'Manic Pixie Dream Girl' pop-culture cliche and about how women are individuals and do not exist to save men (looking at you self described 'sad bois')," explains vocalist/guitarist Sophie Bartholomew.

"We wanted the track to have a really fun but slightly brash feeling about it and we think what's transpired is an unapologetic yet playful anthem for women to take control of their own destinies.”