Baby Queen admits to a crush on new single, 'Want Me' 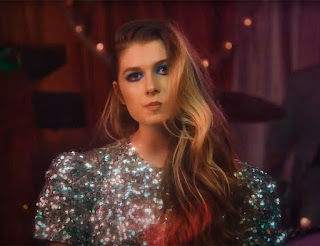 We last heard from Baby Queen back on September with 'Pretty Girl Lie', now London-based Bella Lathum, aka Baby Queen, has shared a new video for her latest track, 'Want Me'.

It follows tracks such as 'Internet Religion' and 'Buzzkill', and is another taster of her 'Medicine' EP, due later this month.

"I wrote ‘Want Me’ about an actor in one of my favourite television shows, which is kind of strange," she says. "I remember watching it and just thinking, 'here we go'. I hadn’t fancied somebody for about two years and I definitely don’t have the time for any sort of romantic relationship in my life right now, so it kind of suited me to have a stranger as the object of my affection.

"It became clear to me that I had to capitalise on the feeling and blow it out of proportion in my own mind, which is what this song does in a way, but there’s a part of me that defaults into a state of self-reflection and self-criticism as soon I fancy somebody

"This song is about a childlike crush and an unrequited love. It’s also about my insecurities that seem to be exacerbated by those feelings. This song feels very adolescent to me, and it feels more like a conversation with myself. I love that the lyrics come across as a stream of consciousness. It’s a bit of a sonic tantrum really, especially towards the end when it starts to explode, I think it’s probably the closest thing we’ll get to a Baby Queen love song anytime soon."